So there you are. You have created a new virtual machine late at night and didn't pay close attention when hitting enter on that New-AzVM command. Unfortunately it got placed in the wrong virtual network/subnet.

"Okay, let's just create another NIC attached to the desired vnet and then associate it with the VM!" - you think. Unfortunately things are not that easy as you might have guessed...

There are a two possible scenarios.

This scenarios are getting constrained by the following facts, so let's keep them in mind while working through this article.

Let's see what options we have.

1. Move to another subnet in the same virtual network

This can easily be done from within the Network interface blade. Just navigate to IP configurations and from the dropdown box named Subnet choose a different one.

With Azure PowerShell this can be done as follows.

That was easy! But things get more complicated if we want to move to anoter virtual network...

2. Move to another virtual network in the same region

First some disappointing words. Microsoft does not directly support migrations of virtual machines into other vnets.

This implies that we have to redeploy the VM in some or the other way and therefor will face a downtime!

There are two ways we can achieve this. Either be leveraging a recovery service fault or by manually recreating the VM from the OS disk.

2.1 Use a recovery service fault

This way requires a general purpose v2 storage account and recovery service fault in the same region as the VM we'd like to move.

Sounds overkill? Yes, kind of, I agree 😐. But this option is beneficial as it restores all items associated with the VM.

So go ahead and create this resources (if not already existent) and create a backup/restore point of your VM. After completion goto "Backup items > Azure Virtual Machine > Choose your VM" and hit "Restore VM".

Now we don't want to replace the existing VM as it won't give us the option to change the network configuration. Instead we are going to choose "Create new". 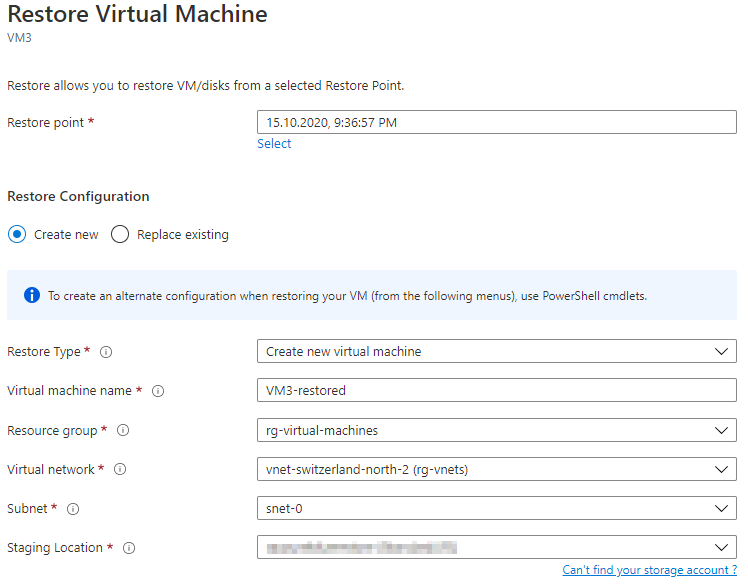 First we will have to delete the original VM object and leave any other objects related to that VM in place (NSG, NIC, DISKs).

Then we are going to open the managed disk and click "Create VM". We can reuse the original VM name. Within the disk section we have to make sure to add any additional data disks if applicable.

Then from within the network section we finally can select the target network and subnet. Here we also can reuse and existing public ip and nsg object if applicable.

As mentioned in the beginning you can't attach the VM/NIC to a virtual network which is in another region. Therefor we would have to move at least the disk to the target region.

Okay that's it for today. In case there is already a recovery service fault and storage account in place I always would choose that route for the move. Otherwise there is only the poor mans choice left, which involves manually recreating the VM.

This post talks about the authorization code flow - probably the most common OAuth 2.0 flow type. And also about the PKCE extension, which can be seen as the successor of the implicit grant flow.…

OAuth 2.0 & OpenID Connect does have a reputation of being complex. In this series of posts I am documenting my own endevaours to understand this protocol in more depth…